In addition to the practical way of designing tessellations presented last week by Jean Larson, there is a whole field of mathematical theory and practice related to tessellations.  I loved geometry in high school, but the theoretical stuff quickly gets beyond me.  Here is a summary of more practical implications.

A shape is said to tessellate if it can cover a plane without gaps, extending to infinity in all directions.

The regular polygons that will tesselate are:

From there it gets complicated as to which figures will tessellate and which will not, but to go on with practical information:

It’s perfectly OK to draw lines inside your tessellating shapes, which may mean they don’t all look alike anymore.  An excellent example is this pattern by Alison Glass.  The design is composed entirely of equilateral triangles, all the same size, BUT she has drawn lines within some of the triangles to create secondary designs. 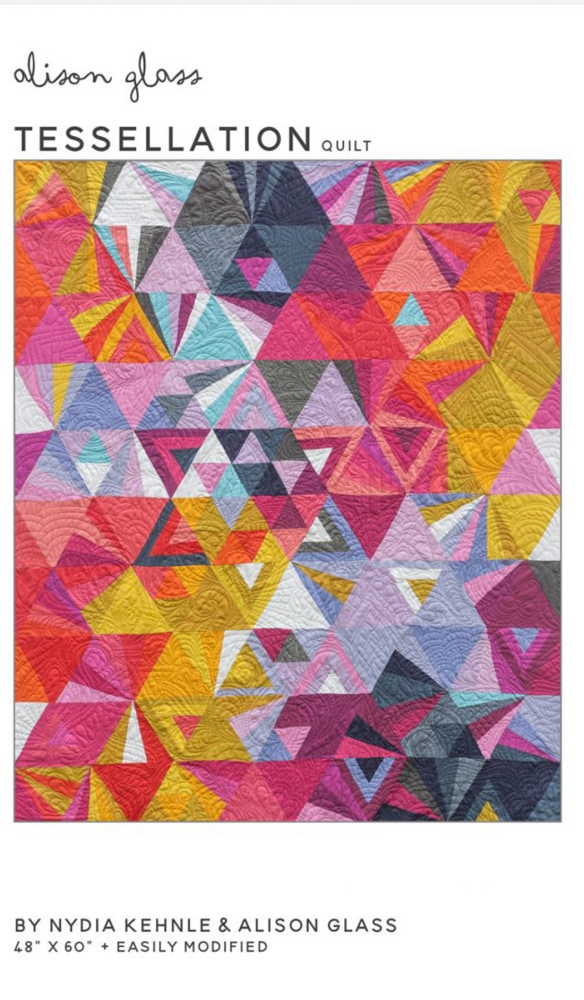 It’s OK to use more than one shape to cover a surface, or more than one size of the same shape, as long as the whole pattern can be continued to infinity.  (Who knew?)  Here’s are examples, drawn in EQ8:

This tessellating design is composed of squares of 2 different sizes

This tessellating design is composed of 2 different shapes.

Many of our traditional quilt patterns are actually tessellating designs.  The second example above is just a recoloring of Tumbling Blocks.

There are many, many ways to create tessellating designs, and I’ll direct you to some additional resources next week.  Meanwhile, one of my favorite easy ways to create tessellating designs is something called “pattern blocks“.  The link takes you to a fun site where you can develop patterns consisting of one or more shapes.  This works because the angles of all the pieces are either 30, 60, 90, or 120 degrees.  I just love that the site is intended for kids–it’s all I can do to wrap my head around it!  And I have no idea how to tell which combinations will tessellate except to try.  Here’s one I made on the site that I think will tessellate:

And FYI, the MQG published a brief article on tessellations back in January.  Access it here.  You’ll have to log in with your usual password first.

Next week: more resources to help you create tessellating designs.

When I noticed that 2 of my favorite 11 quilts at AQS-Charlotte were by Jean Larson, I knew I had to meet her. Luckily, while I was trying to figure out how to contact her, she contacted me! Jean has lived in Chattanooga since the early 1970s, so we met at AQS-Chattanooga.

First, as a refresher, here are the two quilts that attracted my attention at AQS-Charlotte: 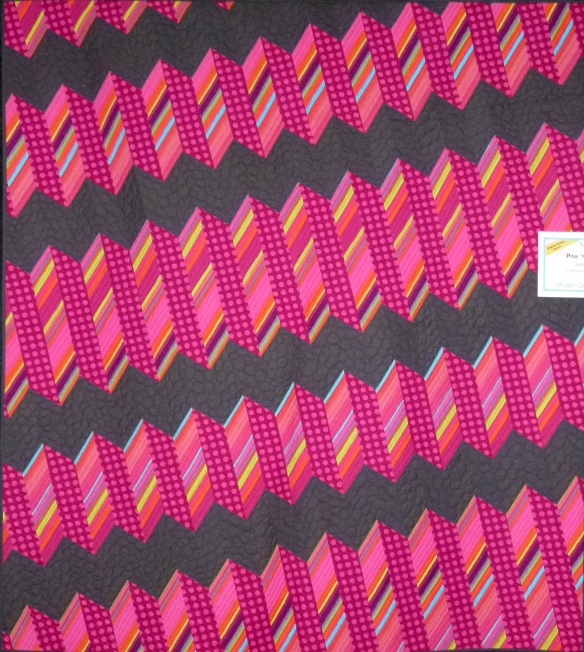 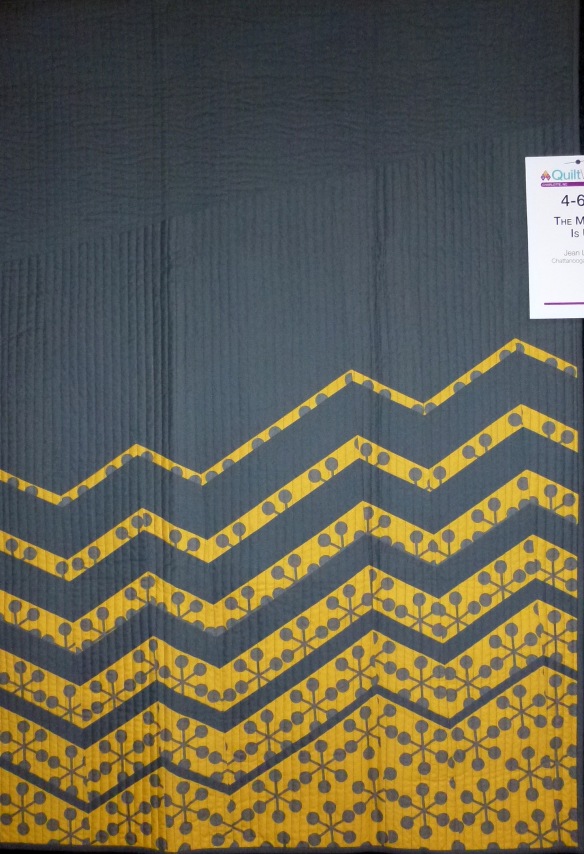 The Market is Up, another quilt by Jean Larson

Jean entered a different, and maybe even more interesting, quilt in AQS-Chattanooga:

Jean (right) and I pose in front of her quilt, “Barbed Wire” at AQS-Chattanooga

There are so many things to see in this simple quilt!  First, the design is tessellated!  Jean is a mathematician by training, so she explained it to me, but I’m going to have to ask her to write a guest post to explain it to you.  More on that later.

Second, those variations in yellow are for real, not just trouble with exposure on my camera 😉  The two yellows add complexity to the quilt.  And finally, although I couldn’t see it until she pointed it out, this quilt is actually a grid of squares in alternating colors: 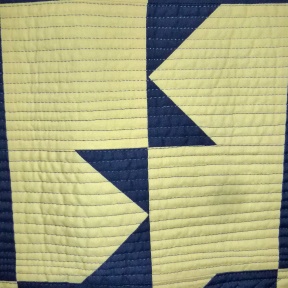 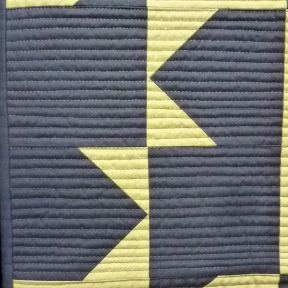 Look at the quilting, too!

So, here’s a little bit about Jean:

She’s had several starts at quilting.  Her first quilt, in 1976, was a traditional log cabin made with the quilt-as-you-go method and using poly-cotton fabrics, which were about all that was available at the time.  Her second, in 1984, was an orange and turquoise quilt that she worked on while potty training her two adopted boys!  She began quilting seriously in the late ’90s.  In 2012 she discovered modern quilting through a neighbor, and she hasn’t looked back since.  She’s an active member of the Chattanooga Modern Quilt Guild and apparently knows everybody–numerous people stopped to chat with her while we were talking about quilts at the AQS show.  She had a quilt accepted for the first QuiltCon in 2013, and it has been published several places as an example of good use of negative space.  Here it is:

Lanterns, by Jean Larson, was accepted for Quilt Con 2013

Jean says she likes simplicity and alternative grid work in quilts.  She is inspired by geometric shapes and by fabrics–especially stripes.  She loves the mathematics of tessellations and plans to make more tessellated quilts.  I look forward to seeing them!

And I’m going to beg her to write a guest article on tessellations for my next design-your-own-quilt post.  If you know Jean, encourage her to do it!