My friend Claire made me aware of Threads of Resistance, “a juried exhibition of work created to protest the Trump administration’s actions and policies”. I usually avoid politics here, since this is a blog about quilting.  But I am very concerned about some of the Trump administration’s plans, so I’m making an exception.  Here is my quilt, the Statue of Liberty wearing a hijab, because it’s un-American to exclude immigrants based on religion. 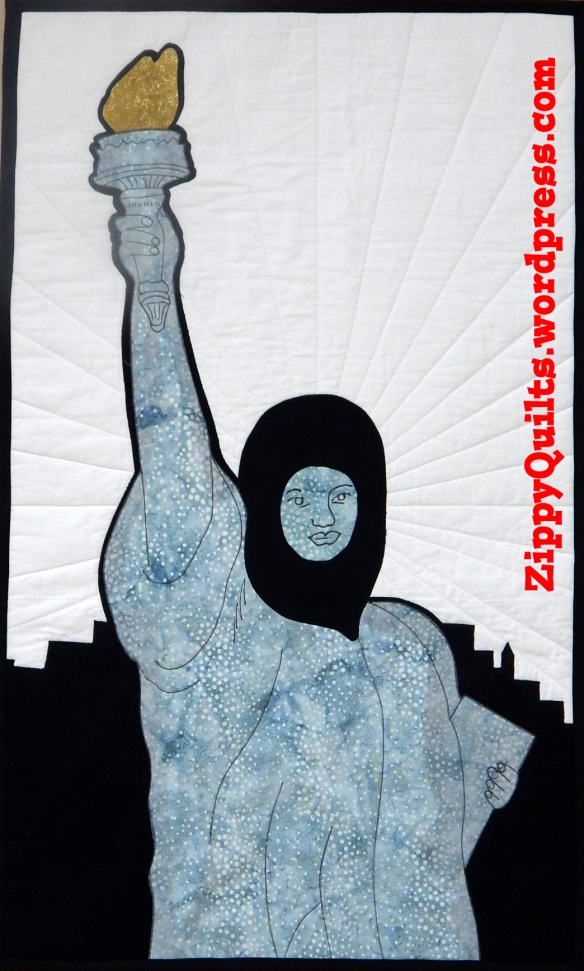 The Statue of Liberty stands for freedom, including freedom of religion.

As always, I learned a lot doing this.  First, there are a TON of public domain pictures out there.  I finally found a couple showing the Statue from the perspective I wanted, and sort of improvised from there.  Second, it IS possible to find verdigris-color fabric, and it’s easier than I thought because everyone seems to have a different idea about just what shade “verdigris” is.

I drew my design on a big piece of paper then traced it onto the verdigris fabric.  I quilted the rays on the background, then cut out the statue and horizon pieces and fused them to the background.  I consulted one of Sue Bleiweiss’ books about how to do the black outline, but ended up not using her method because I was too far down my own road before I consulted the book!  I would like to say I think a project through thoroughly before beginning, but the truth is that often I have no idea how I’m going to do something until I’m doing it! 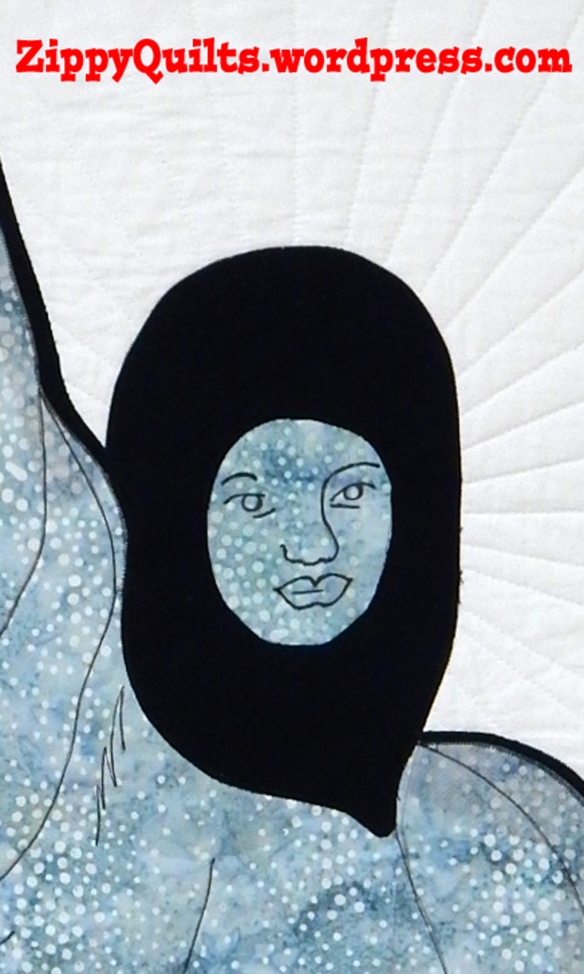 I outlined most of my drawn lines with black thread, but then had to go back over the lines in the face with marker to make them stand out.  One final lesson:  Kona cotton was a poor choice for fusible applique; the weave is much too loose. I had to fray-check the edges even after I fused them, and then had to go back and trim some “whiskers” even after I had satin stitched the edges.  From now on I’m sticking to Michael Miller Cotton Couture, which is a much finer weave (similar to the hand of the batik here, which gave me no trouble with fused applique).

If you’d like to make a quilt to submit for the Threads of Resistance exhibit, which is juried, click on the highlighted name and it will take you to the link you need.  And if you disagree with my politics, please do not take offense–allowing differences is what America is all about.

23 thoughts on “Threads of Resistance”