Woo-hoo!  One of the blocks I submitted to the Modern Quilt Block Contest at Modern Quilts Unlimited magazine was selected as a finalist!  I thought they were going to publish pictures of the finalists, but it turns out they had even bigger plans.  I now have a contract to make a quilt for their publication based on my block!  I am so excited!  Of course, this means I can’t show you the block yet.  My quilt is scheduled for the Summer 2014 issue, and I’m happy to say that one of my favorite fabric manufacturers has agreed to provide fabric for it.

And now that the contest is over, I can show you the other block designs I submitted. Here they are: 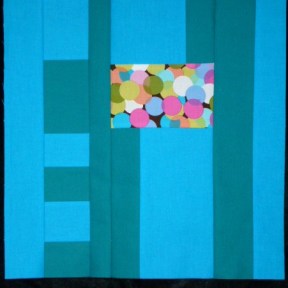 The idea here is a picture window, but actually I designed it improvisationally

Of course this is based on Piet Mondrian’s paintings, and particularly on the Mondrian dresses derived from them

My friend Ann over at Sew Messy (don’t you love that name?) also entered, and one of her blocks finished third!!!  She can’t show it on her blog yet, because it’s going to be featured in a quilt published in the magazine, but go on over and check out her blogs:

And now the other exciting news:  Somebody bought my Quilt Alliance donation in the eBay auction!  I was worried because I figured out AFTER I donated a quilt that most of the people making donations were much better known than I.  However, it did sell, and for a respectable price by my standards.  So a big THANKS to whoever bought it, and now I’m encouraged to start a donation quilt for the Quilt Alliance for next year.  In case you missed the earlier post, this is the 20″ square quilt I made for the Quilt Alliance TWENTY contest:

Rising Star, made for the Quilt Alliance TWENTY contest in 2013

I hope everyone has a Merry Christmas!